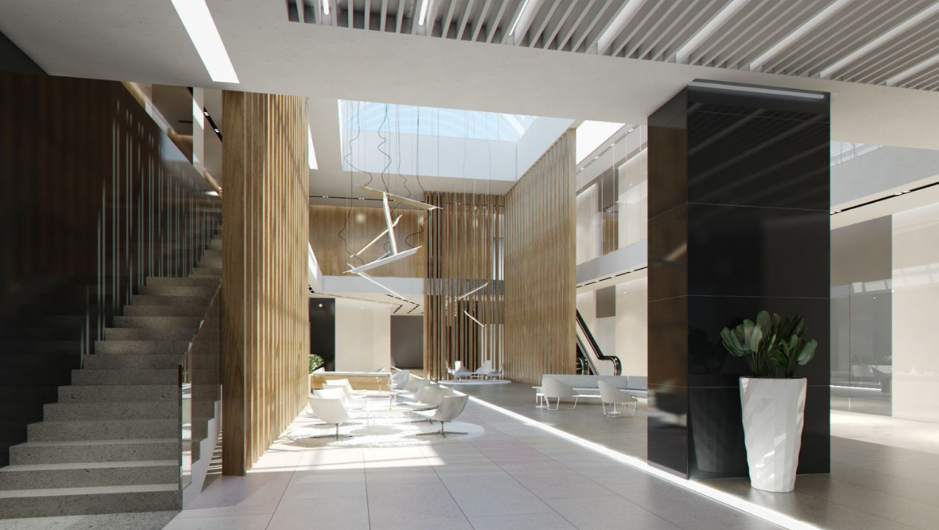 Fire doors versus fire curtains: what are they, how do they work and what are the differences?

Fire doors are a fire protection solution. In this article, we will discuss what fire doors are, how they work, what their characteristics are and what, if any, are the main differences with fire curtains.

What is a fire door?

A fire door or fireproof door is one of the passive fire protection systems that a building may have. Its task is to control the spread of the fire, preventing it from spreading to other fire areas or sectors of the building and, thus, facilitating evacuation tasks. Fire doors can be made from various materials, such as wood, glass, steel, etc.

“A door is defined as a delimiting element between 2 zones that allows the passage or circulation of objects through it”.

Fire doors must have the following characteristics:

Depending on their movement or construction characteristics, there are the following types:

These are usually made up of 1 or 2 layers anchored to a perimeter frame with hinges. They can remain open using magnet retainers that are activated in the event of a fire.

Hinged doors are considered “passage doors”, which is why they require durability tests to verify their resistance to opening and closing.

Formed by one or more layers suspended at the top from a rail guide to carry out their lateral movement, they can be automated using chain mechanisms, or counterbalanced. They are considered mobile partitions. 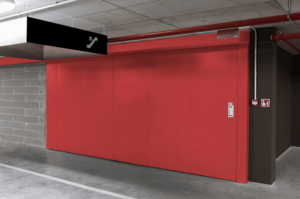 Formed by one or several layers guided by lateral guide mechanisms and retained at the top, generally by an electromagnet, their movement is vertical with a descent controlled by counterweights or mechanical elements for braking control. They can be automated by means of chain mechanisms, or counterbalanced. Guillotine doors are also considered mobile partitions. 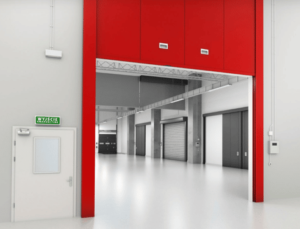 Formed by horizontal slats that allow them to roll up on an axis, forming a spiral. 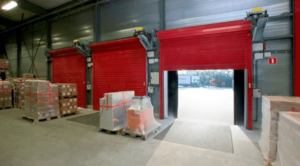 According to its fire resistance rating:

For more information, we also have an article on fire resistance ratings.

What is a fire curtain?

Fire curtains are systems made up of a mechanical element, a textile screen and an actuator mechanism. They remain retracted inside their container chest and are not visible until there is a fire. As soon as the alarms are activated, the curtain descends at a controlled speed from the ceiling to the floor, completely covering the surface.

They are automatic systems designed to guarantee integrity, insulation and low radiation, as well as impermeability to smoke.

Now we will analyze the advantages and disadvantages of each system.

When we recommend fire curtains instead of fire doors

After the analysis above, we can conclude and recommend the use of fire curtains in those scenarios where there are large spaces to be sectorized. However, at Tecnitex we recommend using this characteristic rationally.

Large curtains are less durable and more difficult to install and maintain.

Another advantage is the ease of integration of the systems in renovation projects, where space for the placement of the elements will be limited.

They represent an innovative solution to the architectural concept of open-plan space, allowing for environments with greater amplitude and lighting without breaking with aesthetics.

Advantages and disadvantages of overlapping curtains

What is a SCTEH system and how does it work?

Fire sectors in buildings: what are they and what is their purpose?